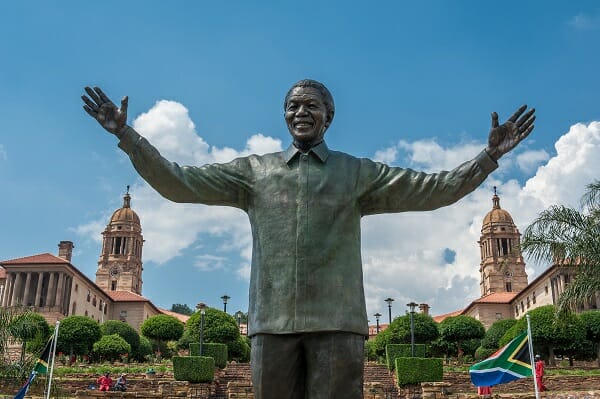 Few people go down in history as one of the greatest that ever lived. For some reason, the Higher Powers rarely gift mankind with these giants among us mere mortals. People like Mahatma Gandhi, Martin Luther King, Mother Theresa, the Dalai Lama. One hundred years ago, South Africa was gifted with its own iconic legend. A man whose astute leadership, humility, insight, compassion, and wisdom earned him the respect, love and gratitude of the entire country.

Nelson Rolihlahla Mandela was born on 18 July 1918. Little did the world know that he would live to rewrite history.

He lived his life passionately pursuing his ideal: attaining equal human rights for all South Africans. While all men and women are born equal, here was a man who truly deserved the respect, admiration and, indeed, worship that raised his head and shoulders above all others. Fairly early in his life it became clear that he was a born leader. But it was only during the 1990s, with the dismantling of Apartheid, that his true colours were revealed. At the time, South Africa’s wounds were raw. A nation divided, many feared that we would descend into civil war. And yet, against all odds, Nelson Mandela almost single-handedly defused the simmering time-bomb. His fervent desire for reconciliation and healing can be found in his Presidential Inauguration speech on 10 May 1994: “The time for the healing of the wounds has come. The moment to bridge the chasms that divide us has come. The time to build is upon us.” And then he devoted the remainder of his life to building this bridge.

As we celebrate Madiba’s birth 100 years ago, we must ask ourselves: Is this the South Africa that he would have wanted for us? The answer, sadly, must be a resounding No. Mandela was unyielding in his condemnation of the corruption, arrogance, and self-preservation at the expense of the populace that so often characterises the offices of power. And yet here we find ourselves. Between corruption, state capture, persistent poverty, ongoing hate speech, a questionable public health system, rampant crime, increasing unemployment to mention but a few of the challenges, our nation is clearly in crisis. The ongoing fiascos, debacles, shambles, and dramas keep only the political elite and their lawyers in the pound seat. Alas, South Africa appears to be divided once again.

Mandela expressed the following as his dying wish: “I am nearing my end. I want to be able to sleep until eternity with a broad smile on my face, knowing that the youth, opinion-makers and everybody is stretched across the divide, trying to unite the nation.” After all, Mandela did for our country, the sacrifices he made, the hardships he endured, the challenges he overcame, do we not owe it to him to fulfill this desire? The question is: how do we do that? How do we unite a South Africa so deeply divided between the Haves and the Have-nots?

Perhaps it is time for us to take a leaf out of Mandela’s book, by adopting the virtues and qualities that he espoused. We no longer have our beloved Madiba in the wings, calmly providing gems of wisdom on how to stay on the path of righteousness. But his legacy lives on. Each challenge can be solved by asking “What would Madiba have done?” It is up to all South Africans to act with the wisdom that he left us with. Working together we can transform South Africa into the country that he dreamt it would be.

“We must work for the day when we, as South Africans, see one another and interact with one another as equal human beings and as part of one nation united, rather than torn asunder, by its diversity.”